Summary: Alcohol use disorder is associated with a significant increase in suicidal thoughts in adults.

There are calls for changes to New Zealand’s national suicide prevention strategy in light of new research linking harmful drinking to a heightened risk of suicide.

The University of Otago, Christchurch study, published in the Australian and New Zealand Journal of Psychiatry, has found that alcohol use disorder (characterized as alcohol abuse or dependence) significantly increases the risk of suicidal thoughts in adults.

The study, led by Dr. Rose Crossin from the Department of Population Health, analyzed data from the renowned Christchurch Health and Development (CHDS) study, a birth cohort of 1,265 children born in 1977. The information from the study cohort was gathered in five data waves when participants were aged between 18 and 40.

Dr. Crossin says such increased risk, observed in this study across ethnicities and in both males and females, backs up previous international studies linking harmful drinking to suicidal thoughts. She says alcohol use disorder is among the most consistently established risk factors for suicide and is the second-largest contributor to overall suicide rates after major depressive disorder.

She recommends these new findings be taken seriously in light of New Zealand’s alarming rates of hazardous drinking and suicide risk. Ministry of Health data from 2020 shows 21% of adults meet hazardous drinking criteria, while coronial data in the year to June 2021 confirms 607 New Zealanders tragically took their own lives.

“The World Health Organization highlights harmful drinking as a significant contributor to suicide, yet our national suicide prevention strategy does not specifically target this risk factor and has zero alcohol-related interventions. This study should be further cause for alarm at government level that strong action is now needed to reduce alcohol-related harm, notably suicidal risk, at both a population and individual level.”

Co-author and Director of the Christchurch Health and Development Study, Professor Joe Boden, says the use of the CHDS data strengthens the findings and efficacy of the study, by identifying and estimating the specific influence of problems with alcohol on suicidal behavior.

“Prior international studies have typically recruited patients already over the age of 16, limiting the ability to adjust for key childhood risk factors” Professor Boden says. 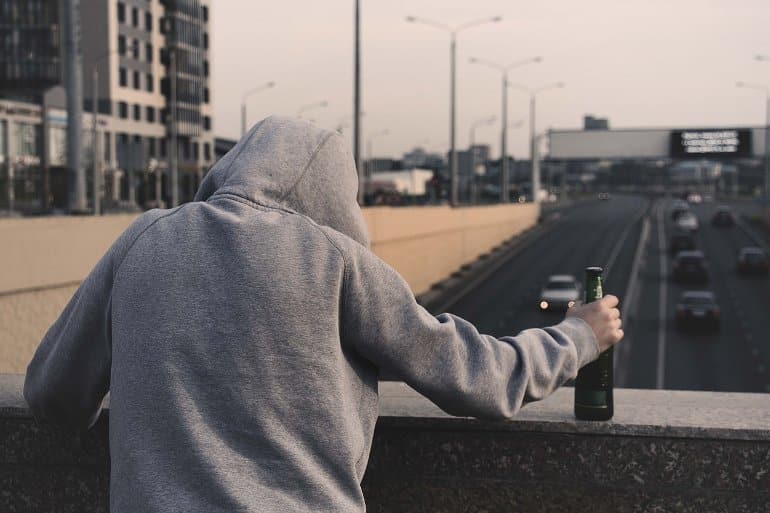 She says alcohol use disorder is among the most consistently established risk factors for suicide and is the second-largest contributor to overall suicide rates after major depressive disorder. Image is in the public domain

“Other studies have gathered data from cohort groups just once, for a limited time during adulthood or by examining males only. Comparatively, the participants in this study were interviewed five times before the age of forty, with their earlier documented childhood experiences also accounted for.”

The CHDS has, over the course of its history, measured a large variety of childhood factors which could potentially explain the relationship between alcohol and suicidal behavior.

For this study, factors were selected for analysis from the database due to their known association with alcohol use disorder and suicide; including family socioeconomic status, childhood punishment, abuse and neglect exposure, a family history of criminal offending and a history of alcohol abuse.

In addition, the study was also able to account for the potential influence of other indicators of adversity in adulthood, such as employment status, relationship instability and life satisfaction.

Dr. Crossin and Professor Boden are presently awaiting publication of a follow-up study using coronial data to determine the prevalence of acute alcohol use in suicide deaths in Aotearoa, as well as the characteristics of suicide involving acute alcohol use.