Summary: Intrusive and unwanted thoughts of harming your baby are relatively common in new mothers, a new study indicates. While there is little evidence to suggest women experiencing these thoughts will actually harm their child, researchers say intrusive thoughts of aggression toward your infant may signal an increased risk of developing OCD.

Many new mothers experience unwanted and intrusive thoughts about intentionally harming their babies, but those thoughts don’t appear to increase the likelihood that they will actually harm their newborn, according to a new UBC study.

The researchers note that such thoughts should be discussed with new mothers as a normal, albeit unpleasant and likely distressing, postpartum experience. In the absence of any additional risk factors, however, they do not represent a risk to infant safety.

The UBC research, published today, is the first large-scale study to investigate the relationship between postpartum-occurring obsessive compulsive disorder (OCD) and maternal aggression towards the infant. It confirms findings from an earlier pilot study.

“What we now know is that when the thoughts areunwantedandintrusive—the mother is no more at risk of hurting their infant than the women who are just reporting accidental harm thoughts, because those thoughts are really normal and happen all the time,” says Dr. Nichole Fairbrother, a clinical associate professor with UBC’s department of psychiatry and the Island Medical Program.

OCD is an anxiety-related condition characterized by the recurrence of unwanted, intrusive and distressing thoughts. If left untreated, it can interfere with parenting, relationships and daily living.

Recognizing the distinction between thoughts that are perfectly normal versus those that might indicate a need for treatment—and those that might signal a threat to the baby—could encourage better communication between healthcare workers and new mothers during a difficult time. 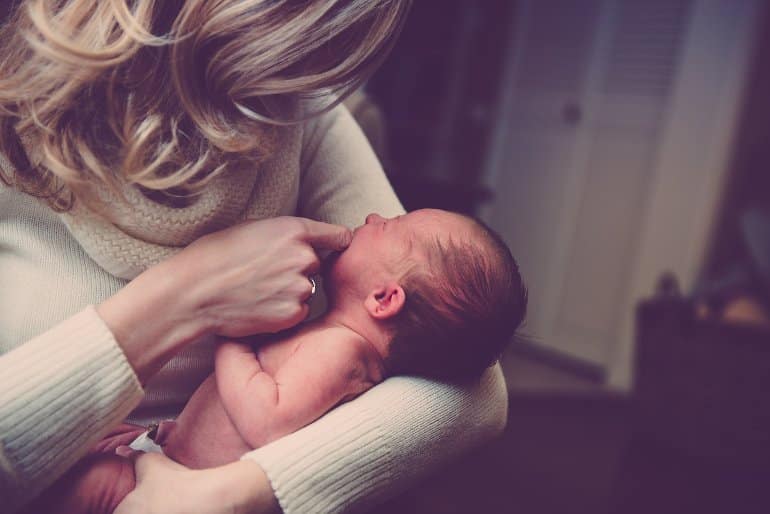 The researchers note that such thoughts should be discussed with new mothers as a normal, albeit unpleasant and likely distressing, postpartum experience. Image is in the public domain

“My concern right now is that there is so little understanding and education about this, that disclosures may trigger responses that are unhelpful,” says Dr. Fairbrother. “We have examples of people who were suffering from postpartum obsessive-compulsive disorder and nevertheless had their child removed from their care because the understanding of this was very poor.”

Out of 763 surveyed postpartum participants in B.C., a total of 388 provided data through questionnaires and interviews in order to assess “unwanted, intrusive thoughts” (UITs) of infant-related harm, OCD and maternal aggression towards the infant.

Among the 151 women who reported UITs of intentional harm, four reported behaving aggressively towards their infant—resulting in an estimated prevalence of 2.6 percent—compared to 3.1 percent in women who did not report this ideation.

In other words, there was less than one percent difference between the two groups.

The results will inform clinical practice guidelines for postpartum harm thoughts, an infographic and a video.

The findings build on a recent study by Dr. Fairbrother and her team from UBC, the University of Victoria, the Women’s Health Research Institute and King’s College London, which found OCD among those who have recently given birth is more common than previously thought, often attributed to thoughts of harm related to the baby.